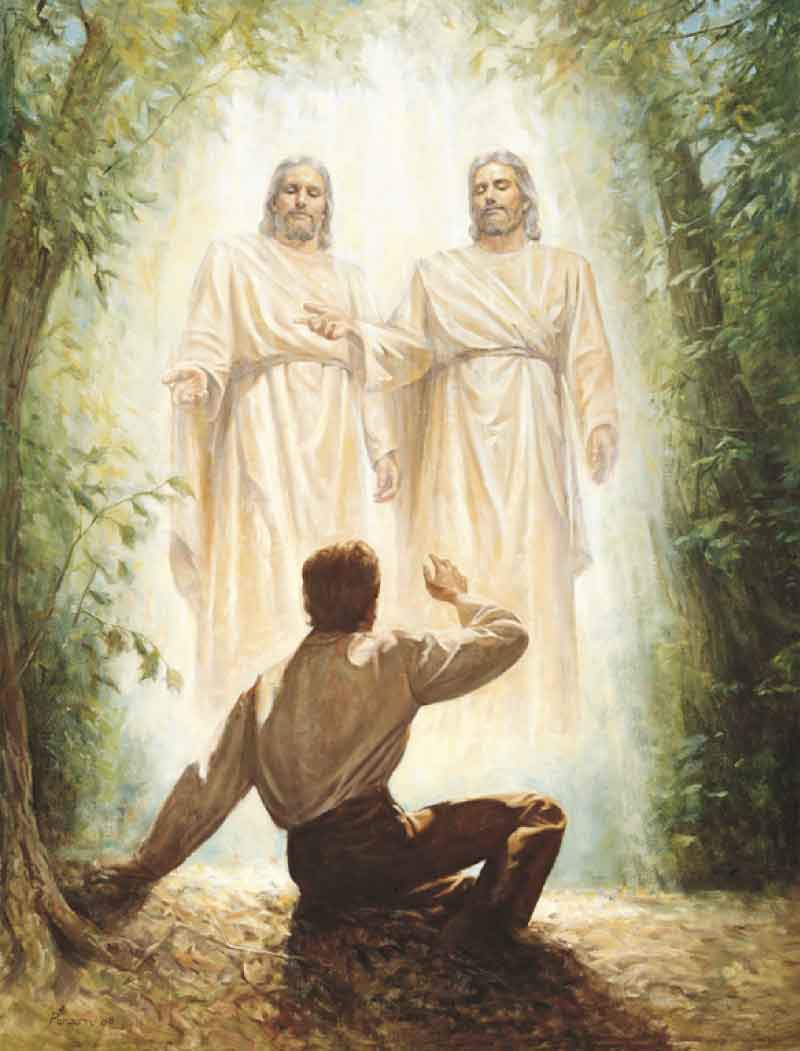 God the Father has a tangible, physical body. Jesus Christ does as well. They look almost identical to each other. They are both glorified, immortal perfect versions of what we look like as their mortal offspring.

The Holy Ghost is a personage of spirit, meaning that he does not have a tangible, physical body.

This explanation of what is often referred to as the Godhead comes from revelation from God to modern to prophets via personal visitations and other methods of revelation, which I will share with you below.

When referring to God, we are most commonly talking about God the Father. That’s how I will refer to God in this article.

Among the many various religious belief systems that exist in the world, there is quite a range of understandings about the nature of God, including what he looks like.

In the Christian world, the perception of God’s appearance is most influenced by idea that Jesus Christ physically represented God the Father, and that he was a physical incarnation of God. This would mean that God looks a lot like his Son, except that there is a lot of confusion in Christianity about God having any physical appearance at all.

In modern revelation through living prophets, we learn much more about the nature of God, including a vital clarification of the concept of the Trinity as defined by traditional Christianity, most of which gets its definition of God from the Nicene Creed, a document that describes God as being incomprehensible. From the Nicene Creed has come the confusion that exists among most churches and the majority of the Christian world about the nature of God, including his appearance.

Indeed, God wants us to comprehend him as much as we are willing to. Jesus prayed diligently that his disciples “might know thee, the only true God”. This knowledge of God is critical for receiving salvation.

I will share with you in this article details about the appearance of God that much more understandable than what has been traditionally accepted about him based upon Christian traditions that developed after the apostasy of the original Christian church that resulted from the death of the original church leaders and the is and what he looks like based upon what He has revealed to modern prophets.

God’s Role as a Father

The Bible refers to God in several instances as “Father”. In his role as the Father of all mankind, God can be seen as the perfection of the good attributes possessed by good fathers. He is a patient, concerned Parent who is raising his children, similar to

This connection between God’s fatherhood of mankind and the role of mortal fathers is drawn clearly from a comparison Jesus made in the New Testament. In Matthew 7: 9-11, Jesus says,

9 Or what man is there of you, whom if his son ask bread, will he give him a stone?

11 If ye then, being evil, know how to give good gifts unto your children, how much more shall your Father which is in heaven give good things to them that ask him?

This parallel between the expected behavior of earthly fathers toward their children and the perfect version of a Father who knows how to “give good things to them that ask him” allows us to clearly draw the parent/child relationship between God the Father and anyone who has ever lived.

There have been several recorded occurrences of God appearing to people in the scriptures, including these:

In a vision given to Joseph Smith as a young boy in 1820, God revealed himself alongside Jesus Christ. That vision, known as Joseph Smith’s First Vision, clarified centuries of misunderstanding about the appearance of God as well as his relationship with Jesus Christ.

When the young boy Joseph Smith went into a grove of trees in 1820 in search of answers about God’s nature and trying to determine which Christian church to join, he was visited by God and Jesus Christ, who appeared as two separate and distinct individuals, each speaking and acting on their own. This account of God’s nature and appearance is consistent with many accounts in the scriptures that describe God and Jesus Christ in settings where both are present, including when Stephen was being stoned. He looked into heaven and witnessed God, with Jesus standing on his right hand.

I’m including a video re-enactment of Joseph Smith’s First Vision, which is the most detailed account we have of what God looks like.