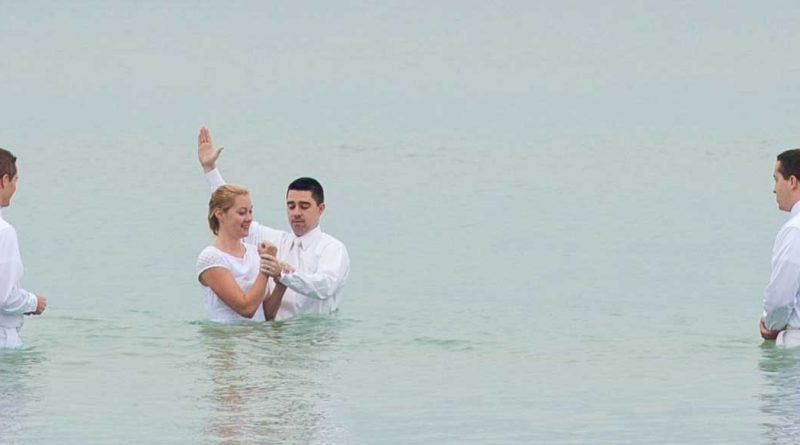 2 Neither did they receive any unto baptism save they came forth with a broken heart and a contrite spirit, and witnessed unto the church that they truly repented of all their sins.

3 And none were received unto baptism save they took upon them the name of Christ, having a determination to serve him to the end.

4 And after they had been received unto baptism, and were wrought upon and cleansed by the power of the Holy Ghost, they were numbered among the people of the church of Christ; and their names were taken, that they might be remembered and nourished by the good word of God, to keep them in the right way, to keep them continually watchful unto prayer, relying alone upon the merits of Christ, who was the author and the finisher of their faith.

If you’re interested in the topic of how to become a Mormon, it’s very likely that you know something about the religion. Hopefully you have had good experiences interacting with members of the church, or maybe you’ve even met with missionaries and learned something about our beliefs.

My own parents both joined the Mormon Church after being raised as a Methodist (my dad) and a Baptist (my mom). My parents raised me and my six siblings as Latter-day Saints (another, more appropriate, way to refer to “Mormons”), and we are all still active in the church. In fact, six of us served – at our own expenses – full-time two-year (eighteen months for my younger sister) missions to various places we were asked to go and share the gospel and give service. In short, the organization that much of the world knows as the Mormon Church has been a crucial part of my upbringing, and I am currently passing those beliefs and practices on to my seven children.

In this article, I’ll do my best to fill in the missing pieces so that you can educate yourself on the process and, if you feel the motivation, you can continue your spiritual journey as a member of the church to which I belong.

To begin with, I am going to clarify something about the designation “Mormon” and correct that terminology as I move forward with this explanation of how to become a Mormon.

The correct name of what is often referred to as the “Mormon Church” is The Church of Jesus Christ of Latter-day Saints. That name has been the official name of the church since 1838. The terms “Mormon Church” and “Mormons” both come from the church’s use of The Book of Mormon (in addition to the Bible and scriptures that have come from modern prophets), which is a translation of ancient records made by prophets that lived in the Americas prior to their discovery by Columbus and other explorers who would later settle this side of the world.

[I will often refer to the church as the LDS Church as a shortened version of the church’s name throughout the rest of this article.]

Becoming a member of The Church of Jesus Christ of Latter-day Saints involves making a commitment that is significant. Joining the church is typically a life-changing experience for anyone who is willing to go through the process of studying and understanding the church’s teachings and officially becoming a member of record through baptism.

I believe that The Church of Jesus Christ of Latter-day Saints was established directly by God in preparation for the return of Jesus Christ to be King over the earth as described in the Bible. I also am confident that anyone who is seeking after the truth and who is willing to follow whatever direction the Savior gives them will ultimately become a members of His church, whether in this life or in the next.

As you read through my description of “How to Become a Mormon” (better labeled “How to Become a Latter-day Saint”), I hope you can get a sense of what it means to prepare yourself to accept the covenants associated with being baptized by one holding authority from Jesus Christ as a way to opening the gate to the strait and narrow path that leads back to God’s presence.

Accepting the Core Doctrines of the Church

Here are the core tenets of the faith that you should learn about. These will form the foundation of your testimony that the teachings of The Church of Jesus Christ of Latter-day Saints (the “Mormon Church”) are true.

Becoming a Mormon (a member of the LDS Church) should lead to living the life of a disciple of Jesus Christ, which involves working daily to become better, ultimately pursuing perfection in the next life. The Church of Jesus Christ of Latter-day Saints is the vehicle that has been created in the last days prior to the Savior’s return that helps people to live the lifestyle required of those who can with commitment call themselves true Christians. In the LDS Church, the framework exists for helping members to repent, to be fellowshipped, and to walk the strait and narrow path to eternal life.

To join The Church of Jesus Christ of Latter-day Saints, the most important qualification is that you make a commitment to daily trying to become like Jesus Christ.

The church has published information for missionaries to use when preparing people to be baptized as new converts. If you’d like to read the full chapter about what’s expected, you can read chapter 12 of the Preach My Gospel Manual, which is entitled: How Do I Prepare People for Baptism and Confirmation?.

The image below provides the highlights of that preparation. As noted in the image, some of these requirements come from modern day scripture (Doctrine and Covenants 20:37), while the rest are preparation requirements from the current leaders of the church.

The church’s code of moral commitments is unique, especially among Christian churches in the modern age, most of which have become watered down in their commitment to the Ten Commandments, especially things like keeping the Sabbath Day holy and not using the Lord’s name in vain.

Here are a few of the commitments you make when you are baptized a member of what the world knows as the Mormon Church:

The Law of Chastity: Sexual relationships are forbidden outside of being a married couple. Homosexual and other sexually deviant practices are not acceptable.

The Word of Wisdom: Consumption of alcohol, tobacco, harmful drugs, and other things that harm the body and that create addictions are forbidden.

Observing the Sabbath Day: As a Latter-day Saint, you’ll be expected to treat Sunday as the Sabbath, a special day that is set aside for worship and renewal. In the early days of America, most of society observed the Sabbath. However, most Christians have abandoned Sabbath observance. Not coincidentally, Sabbath Day observance is one of the signs of the Savior’s true church.

Tithes and Other Offerings: The Mormon Church follows Biblical teachings regarding tithing and offerings. Members of the Church are expected to pay a tenth of their increase (however you choose to define that) as a tithe to the church. That money is used for the following purposes, as described on the church’s official website.

In addition to paying tithing, Latter-day Saints are also expected observe the law of the fast. On the first Sunday of each month, members of the church skip two meals, then donate the amount they would have spent on those meals to the church as “Fast Offerings”. That money is used to help others who are struggling financially and need help with food, clothing, and other of life’s necessities.