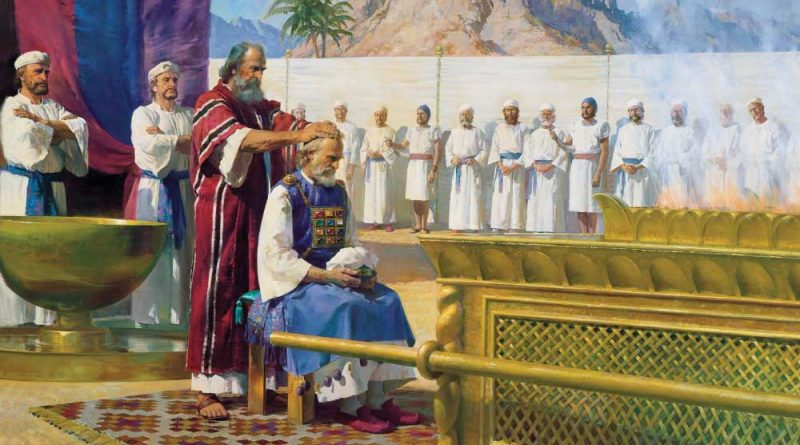 This post is about Aaron, the older brother of Moses, whose life is described in the Book of Exodus in the Old Testament. To learn more about the significance of Aaron for modern Christians and followers of the gospel of Jesus Christ, feel free to chat with us here, or submit your contact information if you’d like someone to reach out.

Much has been revealed by modern prophets about the importance of the work done by the Old Testament Aaron, including the restoration of the priesthood authority

It’s likely that you know at least on male named Aaron. The name has been one of the 50 most popular names for boys in the United States for decades. For most of those who use that name, it’s likely that their namesake is Aaron, the older brother of Moses.

Aaron in the Bible

Here is what the Bible record says about Aaron. The Biblical account of Aaron establishes his significance in Jewish and Christian history and culture.

Aaron was a Levite: Exodus 6: 16-20 establishes the genealogy of Aaron and Moses, and traces their heritage back to Levi, one of the twelve sons of Israel.

Aaron was Moses’ older brother: Exodus 7:7 explains that Aaron was three years older than Moses in context of their interaction with Pharaoh, which took place when Aaron was 83 years (fourscore and three) old, and Moses was 80 years (foursquare) old.

Aaron was a good speaker, and was appointed as a spokesman to help Moses lead the Israelites out of Egypt: Exodus 4:10-16, 27-31 describes Moses’ being instructed by God to not be concerned about his being “slow of speech, and of a slow tongue.” In these verses, the Lord tells Moses that Aaron will be his spokesman to the children of Israel. Aaron and Moses gather together the elders of Israel and demonstrated their callings as representatives of God in delivering them from their afflictions.

Aaron accompanied Moses up Mount Sinai and saw the Lord there: Exodus 19:24; 24:1, 9–11describes the experience of Aaron going with Moses to Mount Sinai after the Lord had commanded Moses to bring him and along. The scriptures record that Aaron, Moses, and other leaders of Israel “saw the God of Israel: and there was under his feet as it were a paved work of a sapphire stone, and as it were the body of heaven in his clearness.”

Aaron was appointed a judge of the Israelites during Moses’ and Joshua’s absence from the camp: Exodus. 24:14, 18 describe Moses’ instructions to the leader of Israel to have Aaron and Hur make decisions regarding “any matters to do”.

Revelation to modern prophets clarifies and reiterates the role of Aaron and the priesthood given to him and his sons: Doctrine & Covenants 84:18, 26–27

And the Lord confirmed a priesthood also upon Aaron and his seed, throughout all their generations, which priesthood also continueth and abideth forever with the priesthood which is after the holiest order of God.

26 And the lesser priesthood continued, which priesthood holdeth the key of the ministering of angels and the preparatory gospel;

27 Which agospel is the gospel of repentance and of baptism, and the remission of sins, and the law of carnal commandments, which the Lord in his wrath caused to continue with the house of Aaron among the children of Israel until John, whom God raised up, being filled with the Holy Ghost from his mother’s womb.

Restoration of the Aaronic Priesthood

The Aaronic Priesthood clearly played a significant role during the time of Moses. That priesthood was lost from the earth after the time of John the Baptist, who was able to baptize Jesus because of the authority he possessed as a holder of the priesthood.

During the apostasy of the early Christian church, the Aaronic Priesthood was removed from the earth.

In preparation for the Savior’s prophesied Second Coming, the Aaronic Priesthood has been restored as described in the video above.

If you’d like to learn more about the role of Aaron in Christian history and doctrine, or if you want more information about the significance of the priesthood authority given by God to man to perform saving ordinances, please chat with us here or send a message through our contact page.