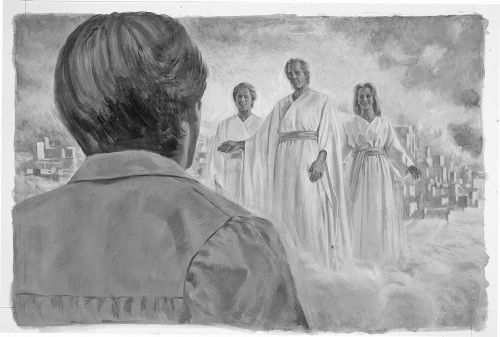 One of the most questions that all humans feel some need to answer at various times throughout their lives has to do with whether their existence is temporary, or if they continue existing after their body stops working, a situation we’ve come to know as death.

Answering the question, “Is there life after death?” naturally draws upon evidence that is spiritual and based in religious belief. Modern science is still too primitive to attempt to address questions about the essence of a person (his or her soul or spirit) and what happens to the soul once the body wears out naturally through the aging process or its functions are terminated because of illness or sudden accident.

Below, I will share evidence that there is life after death in addition to other truths about the specific purpose of this life, a common purpose that applies to all who are given the great opportunity of experiencing life a human being.

The answers about life after death I provide here are based upon the teachings of The Church of Jesus Christ of Latter-day Saints (also known as the LDS Church or the Mormon Church), the church I have belonged to my entire life. I believe that the church holds the fulness of the gospel and is the church that was established by Jesus Christ to teach eternal truths that cannot in their entirety be found in any other church or religious organization.

The teachings included here about life after death come from:

I am presenting this information based upon what has been revealed to me as being true.

It is up to you, the reader of this article, to draw upon your internal ability to discern whether these teachings are true. You are an eternal being, which means that there is component of your physical makeup that is actually spiritual, that extends beyond this lifetime both backward to the past and forward to the future. Some people call this a conscience. In Christian beliefs, it is understood that the Spirit of God (or Holy Ghost) can communicate to that spiritual component of your earthly experience. As you read through the evidence presented here, you should be able to call upon your internal register to determine the legitimacy of what I share here.

In the case that you feel these teachings are true and would like to learn more about The Church of Jesus Christ of Latter-day Saints, please send us a message here on this page, and we’ll be in contact with you.

People Are Made Up of Body and Spirit

Because we spend so much time dwelling upon physical aspects of our lives, including securing food, shelter, and other daily necessities, it can be hard to understand anything outside of the physical. However, for those to intentionally investigate, it is clear that there is a spiritual part of each of us.

In the Doctrine and Covenants (section 93), this statement is made:

Several times in the scriptures, God points out that he created people (and things on the earth) spiritually previous to creating them physically. In Jeremiah 1:5, Jehovah (as Jesus Christ was known in the Old Testament prior to his birth) told the prophet Jeremiah: Before I formed thee in the belly, I knew thee; and before thou camest forth from the womb I sanctified thee, and I ordained thee a prophet unto the nations.”

To understand why and how the spirit that exists within you is eternal and the physical body that you now possess are connected together in a state that is temporary (for most people, 70-80 years), it it helpful to understand the pre-mortal life and the plan of salvation (which provides context for hte overall purpose of life) in its entirety.

Prior to this earth being created, humans existed as spiritual offspring of God. This existence is clear from many different citations in the Bible and other scripture, including the statement to Jeremiah referenced above. It is also clear from the discussion between Jesus and his disciples in John 9 about whether a man’s blindness at birth came because he had sinned or whether it was from his parents’ sins that a person’s conscience exists prior to his birth.

In the premortal realm, spirit sons and daughters knew and worshipped God as their Eternal Father and accepted His plan by which His children could obtain a physical body and gain earthly experience to progress toward perfection and ultimately realize their divine destiny as heirs of eternal life.

— The Family: A Proclamation to the World.

Here are a few more scripture references that discuss the pre-mortal life of mankind:

22 The Lord possessed me in the beginning of his way, before his works of old.

23 I was set up from everlasting, from the beginning, or ever the earth was.

25 Before the mountains were settled, before the hills was I brought forth:

26 While as yet he had not made the earth, nor the fields, nor the highest part of the dust of the world.

27 When he prepared the heavens, I was there: when he set a compass upon the face of the depth:

28 When he established the clouds above: when he strengthened the fountains of the deep:

29 When he gave to the sea his decree, that the waters should not pass his commandment: when he appointed the foundations of the earth:

30 Then I was by him, as one brought up with him: and I was daily his delight, rejoicing always before him;

31 Rejoicing in the habitable part of his earth; and my delights were with the sons of men.

These are just a couple of several scriptural passages that clarify the Christian teaching that mankind lived previous to their being born into this world. If you’d like to read more scripture references regarding the pre-mortal life, you can visit the Preexistence topic page from ChurchofJesusChrist.org.

What Happens at Death?

When our body fails (ultimately the heart stops beating and the brain quits functioning), the spirit that acts as our immortal and eternal conscience leaves the body, which eventually returns to the dust from which it was taken. This visual is used many times in scripture, including in Ecclesiastes 3:20: All go unto one place; all are of the dust, and all turn to dust again.

Whereas the body dies, the spirit continues to function. Spirit is incapable of experiencing death. Instead, your spirit returns to the eternal realm, free from the limitations (hunger, physical pain, etc.) placed upon it by the body.

This reference of being taken home to God has been interpreted by modern prophets to mean that the spirit moves from the physical realm into the spiritual realm.